In this third and last post in the serie on catalogs, we will cover some not-so-everyday topics, but are considered nice- or need-to-know anyway. In case you are not sure you touched base in this topic sufficiently, two earlier posts will get you started before you jump into deep water: Catalogs Explained (level-1) and Catalogs Continued (level-2) are ready for you to digest first.
Please note this is part 2 of Catalogs In-Depth (level-3). You’ll find part 1 here. 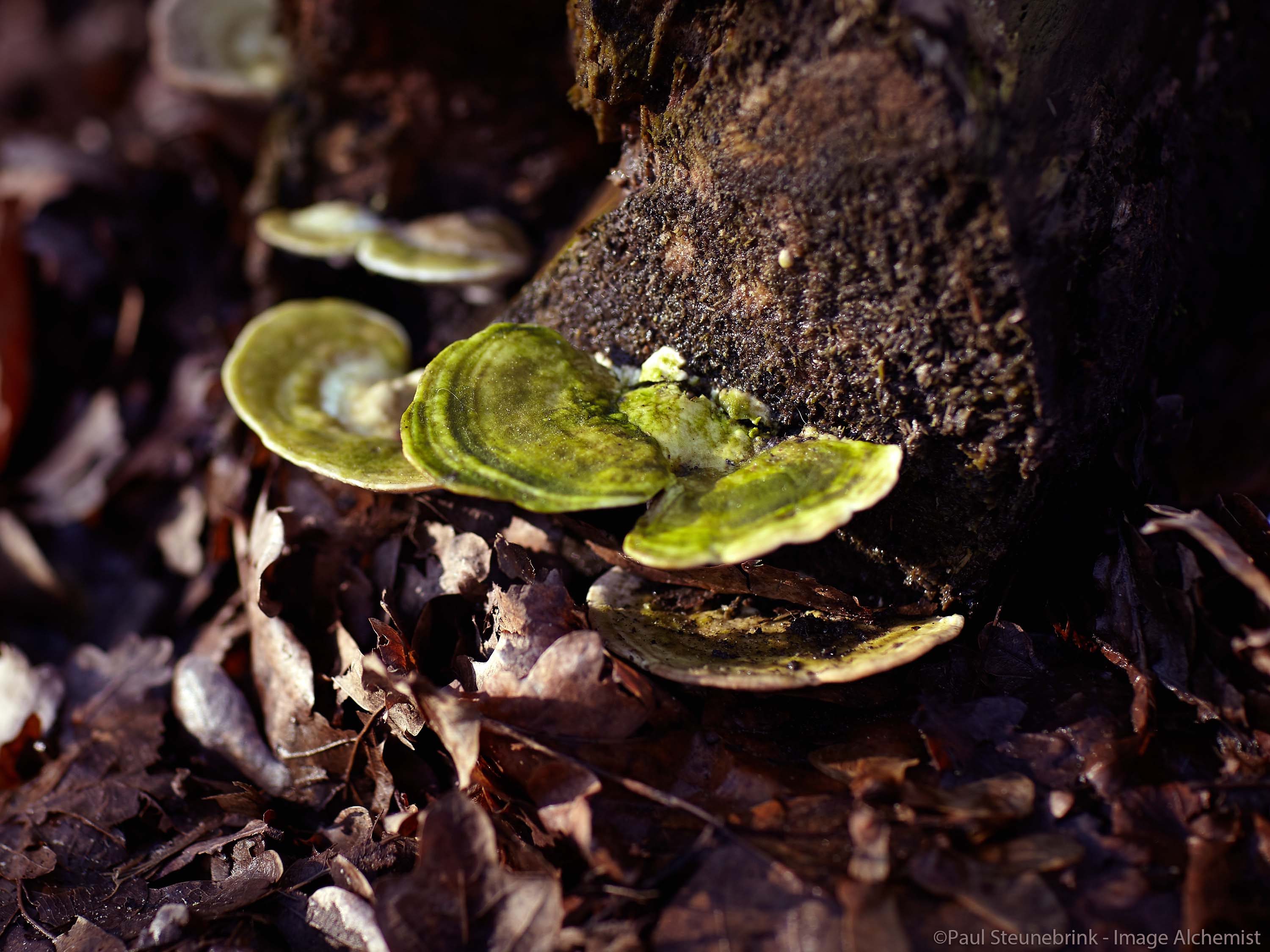 If you frequently make new catalogs you will love the template function. Did you know you can lock the catalog or that it could happen unintentionally? How about special imports like sessions, catalogs or libraries, or export a part of your catalog as a new catalog? You know about referenced and fully managed images, but can you change one into the other? Linked to that, you sometimes need to relocate moved images. Or you have a folder that is filled with new images after import and want the catalog to keep in sync. And last but not least, how about tethering to a catalog, using a hot folder and some special collection properties?

Due to the amount of topics I decided to split the post in two parts. Part 2 you’ll find below, part 1 you’ll find here. Ready for Catalogs In-Depth? Go!

In an earlier post Catalogs Continued I discussed two ways to physically store images in a catalog: inside the catalog folder, or outside that folder on either an internal or external disk. I like to make a few remarks on this concept. 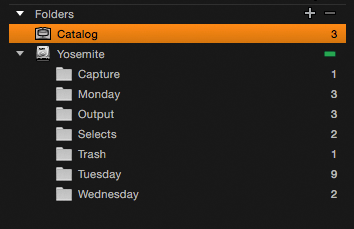 First, you can have both types of storage in one catalog. Maybe confusing to manage, and for sure not an everyday purpose, but it is possible. I will discuss some scenarios in a moment.
If you take a look at the screenshot above, you see three images inside the Catalog folder (highlighted) and several images in their respective seven folders on my internal disk. 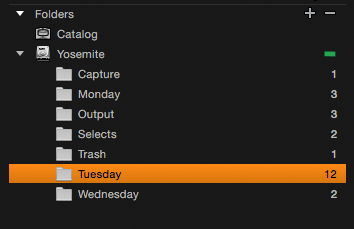 Second, you can change an image’ location to the opposite direction: moving internal images out, moving external images in. In the screenshot above I moved (just dragging the thumbnails) the three images from the Catalog folder into the Tuesday folder (highlighted). 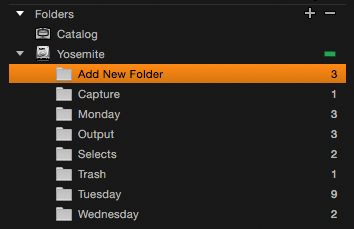 Taking it a step further, why not store your shoot inside the catalog folder (while on location) to a separate catalog? After you are back to base, connected to your mass storage devices, you move the images from the shoot from internal to external location.

Taking another step, you maybe use a different workstation for tethering as you do for editing. A catalog with images inside is easier to move around from one system to another. After importing your catalog with internal images to your editing workstation, move the images to their final destination.

Moving images in or out the catalog folder, or from one disk to another, is just a matter of dragging them around. In case you need to move images to a folder which is not yet part of the catalog, add that folder first with the plus sign of the Library’s Folders section. I discussed this above. 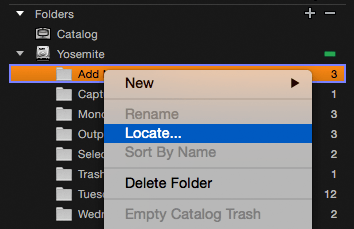 Another scenario is that you (accidentally or intentionally) moved images from Finder (Mac) or Explorer (Windows) to another location. Capture One will mark these images as Offline. Select either the image thumbnail in the browser (for a few images) or the folder in the Library > Folders section (for an entire folder of moved images) and select Locate. In the Open dialog browse to the new location and click the Open button.

The idea of the Synchronize Folder feature (File menu) of a catalog is that you can keep your catalog in sync with a folder you already imported images from.

When you have imported images from a folder, referenced, and after the import images are added to that folder, synchronizing that folder will add the new images to the catalog.

Synchronizing is a manual process, you can not make folder sync automatically. You can however sync a parent folder and enable the Include known subfolders checkbox in the synchronize folder dialog, and sync all folders under their parent folder in one go.
Optionally you can have Capture One display the Import Images dialog for detailed control over the new images that will be synchronized. See the checkbox for Show importer in the dialog above.

The same is true for images that have been removed from a folder, and which were imported earlier. By synchronizing that folder, the images are also removed from the catalog.

Before you remove missing images, you can review them first. Click on the button Show Missing Images in the Sync dialog above. Capture One Pro 8 will create an album with the missing images for that folder for you instantly.

“Sessions are for tethering” still seems to be a common believe among Capture One tethered shooters. However, with Capture One Pro 8, a catalog is as fully featured as a session can be, where tethering is involved. Due to some differences between session and catalogs, there are a few new tricks to learn.

Where sessions are entirely folder based, catalogs rely on collections for their internal organisation and on folders for storing the image, their external organisation. Like with importing images from a card or disk to a catalog, you can set both when tethering.

When you take a look at the Next Capture Location tool while running a catalog, you see familiar settings as in the Import Images dialog (discussed in Catalogs Continued).

The Store Files field allows you to determine whether incoming images are stored Inside Catalog (the Catalog folder, known as fully managed images) or to a selected folder outside the catalog (referenced images). The Collection field allows you to determine whether images show up only in the Recent Captures section of the Catalog Collections, similar to the Recent Imports section for imported images, or else too. What else, or better: where? Introducing the Capture Collection.

About the Hot Folder

The Hot Folder feature is used when regular tethering does not apply. Capture One actively monitors one specific folder and will automatically import new images that come into that folder. Additionally, it will display the last incoming image in the Viewer, like with tethering. Capture One Pro 8 now supports the Hot Folder with Catalog (Capture One Pro 7 did not).

Setting up a Hot Folder is a three-step process. First and second, you select a folder as Hot Folder from the Camera menu. Note that the Folder must already be linked to the catalog. In other words, known in the Library > Folders section. Capture One does not check for this, so you have to do it. If this is not the case, add the folder to the catalog as described earlier on this page. 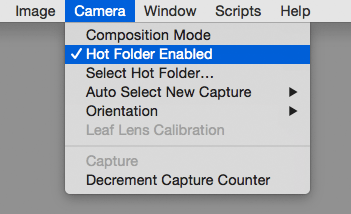 Third, you enable the Hot Folder from the Camera menu. When you are ready with the Hot Folder, you can disable it. Notice the checked mark in the menu, indicating it is enabled.

The Hot Folder feature is actually an automatic sync feature, at least sort of. In the section ‘Synchronize Your Folders’ I stated that syncing is a manual process. Creative minds can abuse the Hot Folder feature for automatic syncing a specific folder. Note however, that Hot Folder works on dynamic changes, that is updating added images real-time, while Capture One is running. Synchronize Your Folders also works on images added earlier to the folder, after the fact. Just a thought.

To Wrap Up: Selects Collection 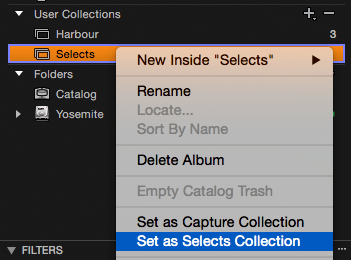 Note the special icon on the album’s name after you assigned the property. 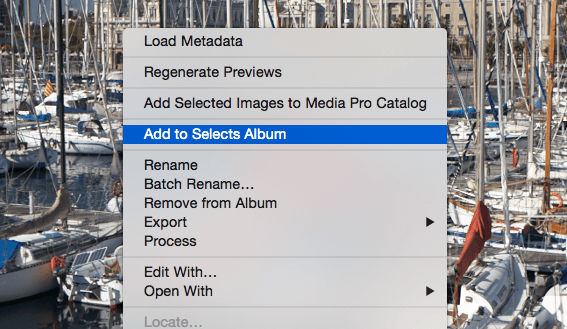 Second, add images to the Selects Collection. Right-click on images on the browser and choose Add to Selects Album.

In contrast to its session sibling, the Selects Collection in a catalog is a special property that you assign to an album, not a folder. Also, images are not moved to an album, like you do with the Selects Folder, but added. 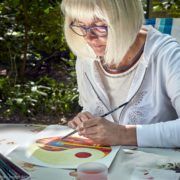 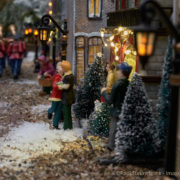 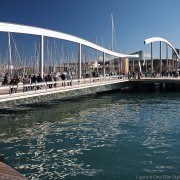 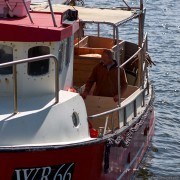 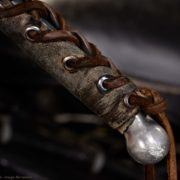 Your Guide to Capture One 20 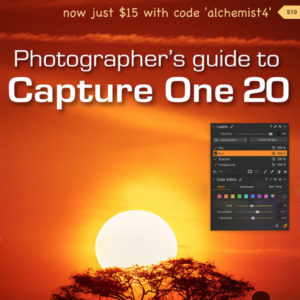